Everett is the county seat of and the largest city in Snohomish County, Washington, United States. It is located 25 miles (40 km) north of Seattle and is one of the main cities in the metropolitan area and Puget Sound region. Everett is the seventh-largest city in Washington state and had a total population of 103,019 at the 2010 census. The city is located at the mouth of the Snohomish River along Port Gardner Bay, an inlet of Possession Sound (itself part of Puget Sound). 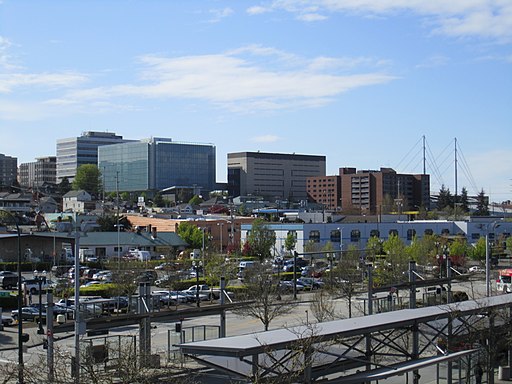 SounderBruce [CC BY 3.0], via Wikimedia Commons

American settlement on the Everett peninsula began in the 1860s, with several sawmills built to serve the area’s growing timber industry. Everett was platted by a group of investors seeking to build an industrial city and named for the son of co-founder Charles L. Colby. The city was incorporated in 1893, shortly after the arrival of the Great Northern Railway, and prospered as a major industrial center. Everett’s economy transitioned away from lumber and towards aviation after World War II, with the construction of Boeing’s aircraft assembly plant at Paine Field in 1967. Boeing remains the city’s largest employer, alongside the U.S. Navy, which has operated Naval Station Everett since 1992. Everett received an All-America City Award in 2002.

Everett remains a major employment center for Snohomish County, but has also become a bedroom community for Seattle in recent decades. It is connected to Seattle by Interstate 5 and various public transit services at Everett Station, including the Sounder commuter train, Amtrak, and commuter buses.

Points of Interest:
Imagine Children’s Museum
(from website) Free and guided play builds a child’s social and academic development. At Imagine Children’s Museum, we promote the power of play: learning and growing by doing what every child loves to do best…play! Our interactive exhibits and activities encourage children chronologically (ages 1-12) and their families to role play, experiment, splash, think, wander and create together in a place where they can feel physically and emotionally safe.

Puget Sound
Puget Sound is a sound in Cascadia, along the northwestern coast of the U.S. state of Washington, an inlet of the Pacific Ocean, and part of the Salish Sea. Wikipedia

Driving around the city: